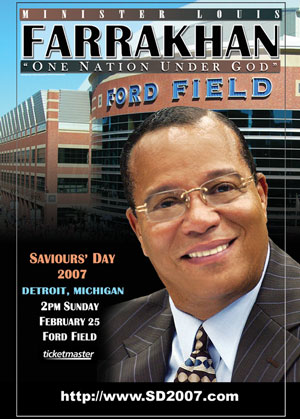 Detroit, MI (SD2007.com) February 22, 2007 -- The Nation of Islam will hold a press conference in the Cobo Arena on Friday, February 23 at 9:30am to announce highlights of this weekend which include:

More details and information on the weekend program and activities will be distributed at the press conference.

Saviours' Day is the annual commemoration of the birth of the Nation of Islam's founder, Master W. D. Fard Muhammad. The convention is normally held in the city of Chicago, headquarters of the Nation of Islam, but this year thousands will convene to celebrate the Nation's 77th Year Anniversary, in its founding city of Detroit, MI.

The convention kicks off on Wednesday February 21, 2007 with an historic exhibit at the Charles H. Wright Museum. International Islamic scholars and Muslim clergy will gather for an interfaith dialogue between Muslims, Christians and Jews on Friday, February 23, along with one of the largest Jumu'ah (congregational) prayer services.

Workshops and conferences will be held through Saturday at the Cobo Convention Center on a variety of subjects including youth empowerment, male/female relationships, health, financial literacy, and religious tolerance. The convention will culminate with the keynote address at Ford Field, by the Honorable Minister Louis Farrakhan on Sunday, February 25 at 2pm. Nation of Islam officials are expecting an estimated 65,000 people to attend.

Posted by FCNN at 9:00 PM No comments: Links to this post