Who are the Five Percenters? 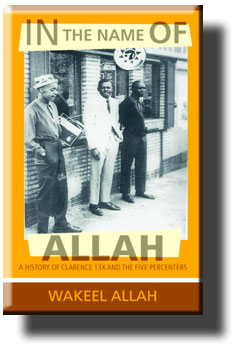 * Musical Audio Clip/"The Meaning of the 5%"

Is it a street gang of gun-runners, dope dealers, thieves and miscreants, or is it a youth group teaching Black pride to inner city youth? Is it an unofficial offshoot of the Nation of Islam, or a special forces Black Op? Is it a social group created to unify and spread the teachings of Islam to all those in need of knowledge, or simply a trendy cultural anachronism responsible for certain aspects of hip hop terminology?

Much is said regarding the Five Percenters—a youth movement founded in Harlem in the mid-1960s. However, most of what is heard is uniformed opinion, speculation and rumor.

Wakeel Allah, an insider and scholar within the Five Percenters, has written the most thorough and comprehensive treatment of this story of Clarence 13X Smith (a.k.a. Allah, a.k.a. The Father) and the origin of the Five Percenters.

At a total of 438 pages and with 432 reference notes, the book may appear somewhat intimidating, but it can be read and enjoyed no matter what level of previous knowledge exists in the reader's mind regarding the subject.

It is important to understand that like most movements that have become national, and even global in their impact and reach, the Five Percenters are not necessarily monolithic in their views and belief systems, or in total agreement regarding what the group is or represents.

The author delves deeply into the intricacies and subtle variances of the different schools of thought without being disrespectful to any, through forthright and effective dissection of the ideological differences that exist within the group.

For the full FinalCall.com book review click on:
http://www.finalcall.com/artman/publish/article_3290.shtml
Posted by FCNN at 3:14 PM No comments: Links to this post

DETROIT (FinalCall.com) - The United States and the United Kingdom are themselves causing, and then exaggerating, a “crisis” in the African “Motherland’s” largest and possibly wealthiest country—the Sudan—and it’s now called “Darfur,” the country’s president said directly in a live-interactive satellite video conference February 23 with members of the Nation of Islam and reporters attending the Saviours’ Day 2007 conference at Cobo Conference Center.

The U.S. and British news media have consistently exaggerated the death toll in Darfur, just as the U.S. has consistently changed its definition of what Sudan must do, in order to gain Western approval of its peace efforts, according to Pres. Omar al-Bashir.

“There is a problem, and the main cause of that problem is the rebellion,” said Pres. Bashir during the un-rehearsed, and un-censored conversation, which was also broadcast live on Sudanese state-run television. “We’ve done everything possible to try to convince those who bore arms against the state and the people, but all efforts and mediation failed,” he said.

Pres. Bashir acknowledged that his country is facing a “problem” in Darfur, but he blamed rebel groups that did not sign on to a peace agreement concluded in Abuja, Nigeria in May 2006. Those groups became the focus of media attention, as well as the recipients of aid and arms from outside of the country, he said.

Posted by FCNN at 11:05 AM No comments: Links to this post

Message of Appreciation from The Honorable Minister Louis Farrakhan

[The following is a transcript of special message of gratitude from the Honorable Minister Louis Farrakhan to all of the well-wishers for his recovery, the audio of which is accessible by visiting http://www.sd2007.com. The message was recorded a days prior to the Nation of Islam's Saviours' Day Convention in Detroit.]

“Greetings to you, I am Minister Louis Farrakhan. I want to take this opportunity to thank all of you who sent me flowers, cards and well wishes for my speedy recovery from my horrific operation. And to those of you who prayed for my recovery, words are not adequate to express my deep, deep sense of personal gratitude.

“Each of you can go back to your mosques, your churches, your cathedrals, your synagogues, your temples, your cloisters—wherever it is that you worship God—and say to your congregation, that our God, by whatever name you call Him, answers prayer.
“Many, many Christians of many different denominations prayed for me. Many pastors put their churches on fasts and prayers for my recovery. There were Hebrew Israelites all over America, Africa and in Israel that prayed for me.
“There were Rabbis and Jewish people that prayed for me to recover. There were Muslims all over the world who prayed for me. There were Buddhists who chanted, and there were those who would do yoga in their chants and in their meditations that prayed for me. There were Hindus who prayed for me. There were Blacks, Whites, Asians, Hispanics and Native Americans who prayed for me.
“How then, could I come through this illness and this horrific operation and not thank God for a message that would be universal in its scope, and universal in its power, to heal the human condition?
“And so, my beloved Brothers and Sisters, I am looking forward to seeing you in Detroit at the Ford Field on February 25th, where my subject will be, ‘One Nation Under God.’ “Be there if you can.”
The audio of this message is accessible by visiting http://www.sd2007.com
Posted by FCNN at 9:32 AM No comments: Links to this post