(FinalCall.com) - On February 27, two days after delivering the historic Saviours’ Day keynote address in Detroit, Mich., the Honorable Minister Louis Farrakhan sat down with Al Jazeera Correspondent Fadi Mansour to discuss the geopolitical landscape in Iran, Iraq, Israel, Somalia; the hidden hands in the Sunni/Shi’ite conflict; and again called for regime change here in the United States and the removal of the neoconservative advisers along with the rest of the Bush administration.

Posted by FCNN at 2:39 PM No comments: Links to this post 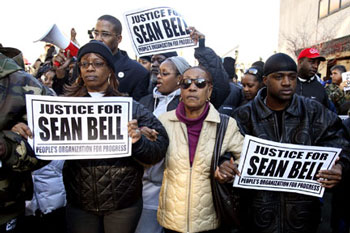 NEW YORK (FinalCall.com) - The murder of Sean Bell on November 25, 2006 is not an abberation, according to community and social activists. In fact, they say when the dots are connected in a socio/political context, it is easy to understand why only people of color are shot down in New York City streets like dogs.
Carl Dix, national spokesman for the Revolutionary Communist Party and co-founder of the October 22nd Coalition to Stop Police Brutality, Repression and the Criminalization of a Generation explained to The Final Call that he believes that the killing of Sean Bell and the wounding of Mr. Bell’s friends stems from the “very nature of this capitalist system and its culture of White supremacy.”
“People must see the killing of un-armed Blacks as a nationwide epidemic—not just something that happens in New York City. The 92-year-old grandmother Catherine Johnson wasn’t killed by police in New York City; she lived in Atlanta, Ga.,” Mr. Dix stressed.
Taking Mr. Dix’s argument one step further, there was a timely analysis put forth on the World Socialist Web Site back in June 2003: “The essential task of the city’s police is that of defending a social order characterized by a gap between the world’s greatest concentration of millionaires, and the other, a population in which nearly a third lives below the poverty line and 44 percent have no financial assets whatsoever.”
Complete article available here:
http://www.finalcall.com/artman/publish/article_3388.shtml
Posted by FCNN at 7:50 PM No comments: Links to this post 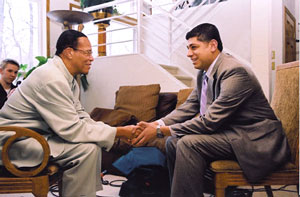 (FinalCall.com) - With the launch of their English language channel in November of 2006, Al Jazeera has begun to challenge the former dominance of BBC and CNN in the area of worldwide news reporting by providing a more balanced view of current events.

On February 27, two days after delivering the historic Saviours’ Day keynote address at “Fard” (Ford) Field in Detroit, Mich., entitled “One Nation Under God,” the Honorable Minister Louis Farrakhan sat down with Al Jazeera Correspondent Fadi Mansour to discuss the geopolitical landscape in Iran, Iraq, Israel, Somalia; the hidden hands in the Sunni/Shi’ite conflict; and again called for regime change here in the United States and the removal of the neoconservative advisers along with the rest of the Bush administration.

When Mr. Mansour asked why the Nation of Islam is made up primarily of Blacks, when Islam is open to all races, Min. Farrakhan responded, “If you look at the Prophet [Muhammad], peace be upon him, why were the majority of his followers in the beginning Arabs? It was because he came to the Arabs, first, and then to the world.

“The Black man and woman in America are in the worst condition. Have you seen a people robbed of their names, their language, their culture, their religion, their own minds turned against themselves; savages, made into tribes in a jahiliyyah [ignorance of divine guidance] like the early Arabs? So, our duty was first to our own people, as the Prophet’s was, and then the light shines from the East around the world, and it shines now from the West around the world. So, we are now inclusive of all members of the human family, but it started with the Black man and woman of America who are in the worst condition of human beings.”

In response to Mr. Mansour’s question about still being accused of being an “anti-Semite,” Min. Farrakhan looked at him, laughed and asked “Are you a Semite?” Mr. Mansour replied, “Yes. I’m Arab.”

“The real anti-Semites are those who came out of Europe and settled in Palestine, and now they call themselves the ‘true Jew,’ when in reality, they were converted to Judaism,” adding that the “real Semitic Jews have been in that area of the world for thousands of years—they belong to Palestine.”

When asked about the global conflicts and America’s involvement in the affairs of sovereign nations, specifically Iran and North Korea, Min. Farrakhan pointed out that for America, even as a superpower, challenging nations now is not as easy as it once was.

“There are 192 nations on this earth. America has troops in 135 of the 192 nations. What are American troops doing all over the world like this? America has surrounded Iran and Russia with bases and troops and nuclear weapons. Russia feels threatened; Iran feels threatened. Iran should not be denied the human right to knowledge. Atomic knowledge should be in the arsenal of knowledge of every nation, and if Iran wants to use Atomic knowledge for peaceful purposes, she is in accord with international law,” Min. Farrakhan said.

Mr. Mansour then asked about the American presidential elections in general and specifically, and if America was ready for a Black president.

“America is ready for a Black president if that Black president looks like they can save the ship that is sinking. America is in trouble and if a Black man can help to save America, the American people might vote for such a person.”

Facts:
- With more than 18 bureaus across the globe; together with the Arabic channel, Al Jazeera Networks have more than 60 news bureaus around the world.
- Al Jazeera TV has been in existence and available in Arabic since 1996.
- Al Jazeera’s English language channel was officially launched in November of 2006.