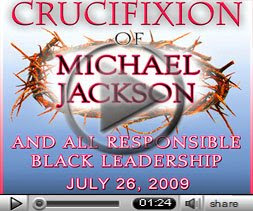 CHICAGO (NOI.org) - The Honorable Minister Louis Farrakhan is scheduled to deliver a major address on the death of Michael Jackson, Sunday, July 26, at 10 a.m. CST from Mosque Maryam, the Nation of Islam headquarters, located at 7351 South Stony Island in Chicago.

Minister Farrakhan's subject is titled, “The Crucifixion of Michael Jackson and All Responsible Black Leadership.” The media and the public are invited to attend. Doors will open at 9 a.m.

Ishmael Muhammad, national assistant to Min. Farrakhan, is available for pre-event interviews in English and Spanish. Media access will be limited to working press only.

Founded in Detroit, Michigan in 1930 by Master W. Fard Muhammad and led to prominence from 1934 to 1975 by the Honorable Elijah Muhammad, the Nation of Islam continues to positively impact the quality of life in America and abroad under the direction of Min. Farrakhan.

Posted by FCNN at 8:10 PM No comments: Links to this post